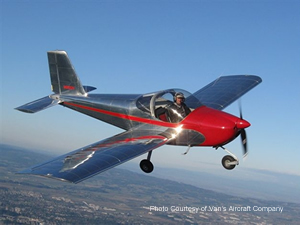 A lot of people are surprised to learn that literally anyone can legally build their own aircraft; and if they do it right, they can obtain an FAA airworthiness certificate that allows it to be legally flown by an appropriately-rated pilot, with certain restrictions.

But it's true. It's perfectly legal to build your own aircraft in your garage. Many people exactly that every year. Such aircraft are referred to by the FAA as "Amateur-Built Aircraft." Assuming they are built correctly and pass an inspection by an FAA Designated Airworthiness Representative (DAR), they can be issued Experimental Airworthiness Certificates that allow them to be legally flown.

There are some limitations that apply to experimental aircraft, however. For example:

There are several other restrictions. Again, the full list can be found here.

On the other hand, once it receives its Airworthiness Certificate and completes its testing, you will be able to use a homebuilt aircraft for recreational flying purposes. In addition, if you personally put in at least 51 percent of the work building the aircraft (as in, with your own hands), you can apply for a special Repairman certification that allows you to perform most required maintenance, repairs, and inspections of the aircraft yourself.

Different Approaches to Building Your Own Aircraft

In theory, it's perfectly legal and possible for you to sit down at your kitchen table, draw up a set of plans out of your head, and build an aircraft. Of course, unless you're an aeronautical engineer, that's probably not a good idea.

Aside from the fact that you might very well kill yourself the first time you try to fly an aircraft that you designed yourself, it will be very difficult for you to convince a DAR to issue an airworthiness certificate to a previously unheard of aircraft. That's why almost all homebuilders use one of two more acceptable approaches to building their own aircraft: building it from plans, or purchasing a "kit" aircraft.

Building an Aircraft from Plans The process of building an aircraft from plans is pretty much what you would think. You obtain a set of plans for the aircraft you want to build, and then you build it. Sounds easy, right?

In addition, you have to actually find and purchase the materials. Building an aircraft isn't like building a coffee table. Every single part can affect the integrity of the aircraft as a whole; so there's no such thing as "close enough" when choosing materials.

You'll also need an assistant. There are many phases of aircraft fabrication and assembly that you simply can't do by yourself. You're going to need a trustworthy helper.

That's why most homebuilders choose the second and much easier option:

Building an Aircraft From a Kit

When you buy an aircraft kit from a reputable company (such as Van's Aircraft), typically the more complex parts such as wing ribs, formed cowlings, welded parts, and other parts that require special tools and skills, are already fabricated for you. Parts that can be assembled with more common tools typically are fabricated by the builder, who also assembles all the pieces into a finished airplane.

Most kit plane sellers offer several building options, however. They differ mainly in price and in the amount of work that will have been done for you at the factory. These options can vary from basically getting a stack of sheet metal and an instruction manual, to an almost completely-assembled aircraft. Most are somewhere in between.

Most builders want to complete at least 51 percent of the work themselves so the aircraft will qualify as "Amateur-Built," making them eligible for the Repairman certification that will allow them to do their own maintenance and inspections on that particular aircraft. If this is important to you, then make sure that you select an option that will result in your doing 51 percent of the work.

If you've never built an aircraft before...

And most people haven't, you may want to check out a local meeting of the Experimental Aircraft Association, where chances are you'll find ordinary people like yourself who have built aircraft. You can also ask the seller of the aircraft kit you're interested in to refer you to people in your area who have successfully built similar kit aircraft. This will help you get a better idea of whether or not building an aircraft is something you want to do.