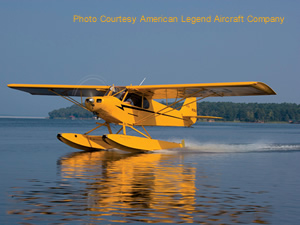 The Sport Pilot Rule was designed to embrace pilots who flew all sorts of flying machines, most of which were very different from each other, and some of which had no counterparts in the world of certificated aircraft.

Many of these flying machines had been designed and built by the pilots themselves, with little regulatory restriction other than keeping them within the limits set by FAR 103. The relative freedom of that tradition resulted in some very creative, very novel flying machines whose flight characteristics were very different from each other.

Obviously, to require Sport Pilots to know how to fly so many different machines would be ridiculous and impractical. They were just too different from each other. So the FAA divided LSA into Classes, Categories, and Sets.

Sport Pilot privileges are initially granted for a narrow group of flying machines that are very similar to the aircraft the pilot trained in. Limiting the scope of training to a small group of very similar aircraft helps keep the training time and costs down, while still providing adequate instruction for the pilot to be able to fly safely. (Additional privileges for other kinds of LSA can be earned and added afterwards, however.)

Some new Sport Pilot students find the FAA's divisions of Light Sport Aircraft to be hopelessly confusing. But it's really not all that difficult when you look at it systematically. To start with, let's look at a chart of all the LSA divided into their classes, categories, and sets.

The FAA divides LSA into six categories, two of which have additional classes (Land and Sea):

The categories are obviously based upon major differences in the essential design of the machine and how it flies, and are pretty easy to understand (as are the Land and Sea classes).

What drives some students batty is the further subdivision of LSA into sets. But once again, it's really not that difficult to understand.

Simply stated, a "set" of aircraft includes all aircraft in a given category and class that share certain design and performance characteristics. A Sport Pilot may fly any aircraft in the same set as one in which he or she has obtained the required training and logbook endorsements.

For example, Set AP-2 encompasses all tailwheel airplanes with a maximum KCAS (knots calibrated airspeed) of less than 87 knots. If you are endorsed to fly an aircraft of any make and model that falls into Set AP-2, then you also may fly other LSA that have tailwheels and whose maximum speeds are less than 87 KCAS. In order to fly aircraft in another set, however, you would have to receive additional training and a logbook endorsement.

In addition, to fly LSA in a different category and class from those in which he or she is already endorsed, a Sport Pilot must obtain additional training in the "new" aircraft from one instructor, and a checkride and endorsement from a different instructor.

The Logic Behind Sets The Sport Pilot rule allows people with no previous aviation training to become pilots with as little as 20 hours of flight time. This greatly reduces the expense of learning to fly, thus opening the skies to thousands of people who previously only dreamed of becoming pilots.

But the speed with which one can become a Sport Pilot requires that their training be tailored to a particular aircraft configuration. It would be unrealistic to expect someone to learn how to safely fly every aircraft within a given category and class in the short time it takes to earn a Sport Pilot certificate. (And when you think about it, how many Sport Pilots have multiple aircraft to choose from, anyway?)

The use of sets allows Sport Pilots to focus their attention on quickly learning how to safely fly a particular configuration of aircraft, with the option of obtaining privileges to fly aircraft in other sets later on, if they so desire.