Most people are familiar with airplanes, but not with the other categories of LSA. This page provides a little bit of information about each of the categories (except lighter-than-air, which contains no aircraft), along with a picture of a representative model of aircraft in each category. 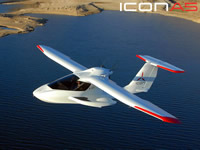 An airplane is a powered, heavier-than-air aircraft with rigid wings, that is supported in flight by the lifting effect of air over its wings, and is controlled by the manipulation of movable control surfaces.

There are many, many examples of LSA airplanes, ranging from the tried-and-true "ultralight-style" airplanes marketed by companies like Quicksilver, to airplanes that are designed to look and feel as close as possible to more conventional-style airplanes.

The airplane on the right is the ICON A5, an amphibious LSA (it can be operated on land or water) manufactured by ICON Aircraft. 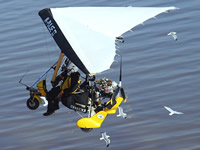 Weight-shift control aircraft are powered aircraft that have rigid or semi-rigid wings, no movable control surfaces, no empennage (tail segment), and an undercarriage (often called a gondola) that is suspended under the wing.

Trikes are controlled by moving the undercarriage relative to the wing to shift the center of gravity, by moving a bar that is connected directly to the wing. There are no ailerons, elevator, or rudder.

The gondola usually has three landing wheels arranged in a nose wheel configuration, but it can also be equipped with skis or floats. The gondola also contains seating for the pilot (and passenger, if any), the flight instruments, and usually the engine.

The trike on the right is a North Wing Sport X2 Weight-Shift Control Light Sport Aircraft. 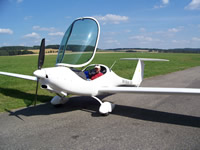 Because no medical is needed to hold any level of pilot certificate for gliders, and because the 10,000 feet ASL or 2,000 feet AGL altitude restrictions on Sport Pilots don't apply to Private Pilots with Glider ratings, most people who want to fly gliders pursue the Private Pilot certificate.

Likewise, there's very little incentive for aircraft manufacturers to certificate gliders as LSA both because there are very few SP glider pilots, and because certificating a glider as an LSA would require that it's never-exceed speed be no more than 120 knots. Most gliders are capable of significantly higher speeds than that, so it would represent a performance downgrade.

Nonetheless, there are a few LSA gliders out there. Most of them are actually self-launching gliders, or "motor-gliders." The glider in the picture on the right is a Phoenix LSA Self-Launch Glider, manufactured by Phoenix Aviation. 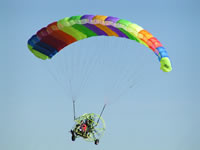 Powered parachutes (PPCs) are parachutes attached to a wheeled gondola equipped with seats for the pilot (and a passenger, in the case of two-seat PPCs), controls, instrumentation, and an engine.

Powered parachutes have no control surfaces. Altitude control is accomplished primarily by varying the thrust of the engine, and directional control by deflecting the trailing edges of the wings (usually by foot pedals attached to the lines). Deflecting both trailing edges down will cause a temporary increase in lift and reduction in airspeed, and is typically done during ascent or to flare the aircraft for landing.

PPCs are slow-moving aircraft with average speeds of 30 to 35 mph. They are very resistant to stalls and have very short take-off and landing distances, enabling many pilots to use their own backyards as runways. On the other hand, they can't safely be flown in more than light winds: Winds of 15 mph are about the limit, on average.

The powered parachute in the picture on the right is a Buckeye Dragonfly. 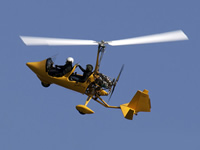 Gyroplanes (also called autogyros or gyrocopters) are a type of rotorcraft. They are powered by an engine that produces forward thrust, and lift is provided by rotors which, unlike the case with helicopters, are always in auto-rotation. (That is, the air passing over the rotors causes them to turn, which in turn produces lift.)

Three advantages to gyroplanes compared to other LSA are that they usually have wide ranges of safe airspeeds, tend to handle wind gusts better than other LSA, and are incapable of stalling.