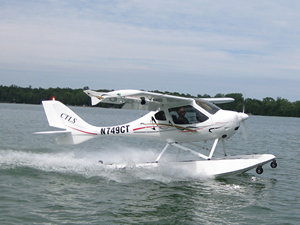 Although Sport Pilots are "Honest-to-Goodness" pilots with FAA certificates, the reduced training time and lack of a requirements for an FAA medical certificate do mean that they have certain limitations that don't apply to pilots holding more advanced certificates and ratings.

One of the more confusing aspects of Sport Pilot privileges has to do with what kinds of aircraft, exactly, they are allowed to fly. Because the training time requirements for Sport Pilots are lower than for other levels of pilots, the FAA wants to limit Sport Pilots to operating aircraft that are very much like the ones they flew during their training.

This has resulted in a rather complicated system of Categories, Classes, and Sets, which are defined by an aircraft's configuration and capabilities. Initially, Sport Pilots are limited to flying aircraft that are very similar to the ones they trained and took their checkrides in. However, additional privileges can be earned once you're certified.

Again, the idea is to assure that Sport Pilots fly aircraft that are very similar to the ones they have received training in. Additional privileges can be earned by undergoing additional training (and in some cases, additional testing) for endorsements that will give you the ability to fly a wider variety of aircraft.

In addition to LSA that were designed to comply with the above requirements, Sport Pilots may also fly other certificated aircraft that happen to fall within those requirements. These would include many vintage aircraft such as the J3 Piper Cub, the Aeronca Champ, and many others.

There may be other restrictions that can be found in FAR 61 Subpart J. But the above should give you a general idea of whether the Sport Pilot program is something you'd be interested in. One of the most frustrating aspects of being a Sport Pilot is that SPs are explicitly forbidden from performing minor preventative maintenance tasks on certificated aircraft. Technically speaking, an SP can't even add oil to a Piper Cub that he or she can legally own and fly.

Because checking the oil (and adding oil, if needed), is a requirement during every pre-flight inspection, the law seems to contradict itself -- as well as creating a constant conundrum for Sport Pilots who fly certificated aircraft.

The EAA and other groups have been requesting that the FAA fix this inconsistency ever since the SP Rule went into effect, without much success.

Sport Pilots operating without FAA medicals (as well as Private Pilots who lack medicals and are exercising Sport Pilot privileges) may also find insurers to be less-than-eager to write policies for them. There is no legal requirement that an insurer issue a policy, regardless of the fact that an SP is a certificated pilot.

In addition, many airports (generally very large ones) do not allow LSA and/or Sport Pilots to use their airports (except in cases of declared emergencies). The justification usually is that tiny, slow-flying LSA piloted by inexperienced pilots don't mix well with air transport traffic -- and this is true. So if you're an SP, don't necessarily expect to be welcome at a big, international airport.

Long story short, Sport Pilots may face additional hurdles, obstacles, and annoyances that other pilots don't have to worry about. But as the aviation community becomes more accustomed to the Sport Pilot Rule, most of these will likely work themselves out.