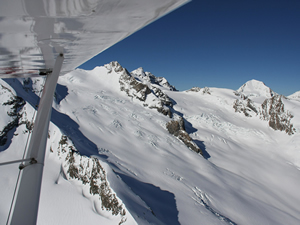 Flying in the winter has its advantages. The skies are often clearer, the views can be spectacular, the lift is better due to lower density altitude, and quite often there's less traffic in the air.

But winter flying can also be less predictable and more stressful, especially for Sport Pilots, who often fly in more remote areas and use smaller airports that may lack functional AWOS facilities, UNICOM staffing, or full-time maintenance. In addition, because there's less general aviation traffic in the winter, you can't necessarily expect reliable PIREPS about weather or field conditions at or around smaller airports.

Finally, the days are shorter during the winter, leaving you that much less time to arrive at your destination before darkness sets in. What would be a routine diversion to an alternate airport during the summer months might plunge you into darkness in the winter.

As pilots, we know that the winter season brings special challenges and requires extensive preparation prior to takeoff and while airborne. No matter how long an aviator has been flying, they still have not seen everything the combination of winter and Mother Nature have to offer.

A crash landing, being marooned for days in super high elevation during a winter storm, and even death from hypothermia are possible outcomes every time a pilot takes to the air in winter weather.

Taking the proper steps to ensure that both you and your bird are ready for cold-weather flying -- including planning, mental and physical preparation, and preparation of your aircraft -- will significantly reduce the chance of accidents or fatal injuries. All pilots, and especially Sport Pilots, need to make these extra preparations for winter flights before they even get to the airport: Part of your responsibility as a pilot is to assure that your aircraft is in safe condition to fly, and winter weather requires extra pre-flight duties to assure that. This is true for both safety and legal reasons.

The first things an aviation lawyer will investigate once an injury accident lawsuit is served on them are the plane and pilot's preparedness for winter flight. Legally and in every practical sense, this is the pilot's responsibility, even if the aircraft is rented. Don't simply assume that "the guys at the FBO" made the aircraft ready for you.

For example, the FAA requires that aircraft be be de-iced before takeoff. Though this may seem like common sense and something that every pilot would check for during pre-flight, accidents have occurred because pilots failed to notice wing icing before takeoff.

Most larger airports use special de-icing fluids to de-ice aircraft. Type I fluids can be heated and sprayed on the wings, and should keep them clean long enough for takeoff. If precipitation persists or if taxi times are long, thicker Type 4 fluids are often used.

Sport Pilots, however, typically don't fly during bad winter weather, and most LSA are not certificated for flight into known icing conditions; so the main consideration for Sport Pilots is usually clearing off the ice that's built up on the aircraft while it's been sitting on the tarmac. Most smaller FBOs just use isopropyl alcohol (rubbing alcohol, basically) for this sort of de-icing because it works just fine and is a lot less expensive than special de-icing fluids.

Other things you should be very careful about during a cold-weather pre-flight are:

Some pilots simply avoid winter flying, either because of all the extra precautions that must be taken, or because they simply don't like flying in the winter. But pilots who fly year round can winterize their planes by following the manufacturers advice and adding a dose of common sense.

For example, your aircraft manufacturer may recommend a different grade of engine oil for winter flying. There also may be suggestions for lubricating moving parts, and even the door locks, with cold-tolerant lubricants. Some aircraft may also need modifications or adjustments such as opening or closing a heater baffle.

If your aircraft has a liquid-cooled engine, then you should carefully check the coolant level and condition before flight.

The fuel system should be thoroughly inspected for water buildup and leaks. This will prevent freezing in the fuel lines, which can cause engine failure while airborne.

If you frequently fly in cold weather, or if your aircraft is hangared in a cold part of the country, you may want to consider a heated hangar or an engine pre-heater that is FAA-approved for your aircraft and engine.

If you use a pre-heater, you should either leave it on all the time, or else make sure you actually fly the aircraft (or at least run it for a while) after pre-heating. This is because heating the engine can cause moisture to condense inside the engine, and you want to get the engine running at full temperature to burn off that moisture so it doesn't cause corrosion.

Winter weather flying requires some common-sense additions to the aircraft's survival gear. A survival kit tailored to the conditions you may encounter can make the difference between living and dying if you have to make an emergency, off-airport landing.

Pilots tend to like gadgets such as hand-held radios and EPIRBS, but it's the simple things that could save your life in a winter survival situation. I suggest you get a small backpack and stock it with the essentials for cold-weather survival: a compass, long johns, flashlight and batteries, first aid kit, waterproof matches, a knife, survival blankets, and maybe a small tent for shelter. Keeping warm until rescuers arrive can mean the difference between life and death in sub-zero temperatures.

Also remember that wet cotton garments cannot protect you from hypothermia. Extra clothing, wrapped in plastic and made of wool or fleece, should be part of your survival kit.

By Carrie Bohns. Carrie grew up a tom-boy and a plain jane. She discovered the joys of graphic design when she went to school and now she does special effect for action movies. Her life has been drastically different ever since.